Astronomy and planetary science continues to play a strong role in Frank’s interests and has since age three. In addition to interning two years on the Galileo spacecraft’s science team for planetary geology, he has built three telescopes, published in Sky and Telescope magazine and was invited three times as an educational guest astronomer at Sossusvlei Desert Lodge in Namibia. Amateur astronomy remains his number one hobby and the night sky his creative and spiritual muse.

Today, Frank combines those astronomical interests with photography to share a unique perspective combining natural subjects with the heavens aiming to tell a story. 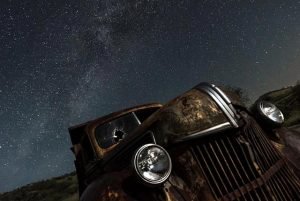 Frank Kraljic is an Emmy-award winning director/cinematographer with over fifteen years behind the camera on commercials, short and long format documentaries and television programming.

Over the last several years, Frank’s work has taken him through South America, Europe, Africa and Asia on projects including a ski-movie/culture trek through Afghanistan and into the West African Ebola outbreak.

On television, he executive produced and directed the docu-reality series 3-Gun Nation on the NBC Sports Channel and wrapped three seasons on The STEM Journals, an Arizona-based kids STEM career show.